It’s taken years for me to get my kids eating real food for dinner. It used to go down like this: Whenever I made something other than chicken nuggets or spaghetti there would be a fight. They’d say they couldn’t eat it, I’d say they’d better try it because that’s the only food they’d see until breakfast tomorrow…half an hour later a bite would be taken, gagging would ensue, and we’d end up with vomit all over the dinner table. So gross. So I stopped forcing them to try a bite, instead just telling them they’d need to finish or go to bed hungry. I’d leave the kitchen because I was frustrated, and a while later they’d tell me they were finally done. And then a week or two later I’d find petrified food stuffed in a kitchen cupboard, or in the shoe closet, or somewhere else. Fun times, right? After years of consistently introducing a variety of dinners and allowing the kids to choose to eat them or not (with the caveat that they could only eat fruit or yogurt if they chose not to eat dinner), we’ve finally built up two weeks’ worth of dinners that all my kids like. It’s a HUGE improvement, but frankly, it still gets pretty boring eating those same dinners over and over again.

These little pot pies are super easy to put together, especially if you have leftover cooked chicken, and with the addition of a little pepper I thought they tasted great! My 5-year-old pronounced the mini pot pies delicious, and my 2 year old kept asking for another “muffin”. The older kids did ask that next time I customize the recipe a little, using only their favorite veggies instead of a veggie mix, but, all in all, it was pretty successful. And I have a new easy recipe to throw into the dinner rotation, plus a few more ideas to try (mini mac and cheese cups and mini cheesy chicken enchiladas will be next). 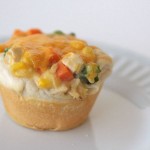