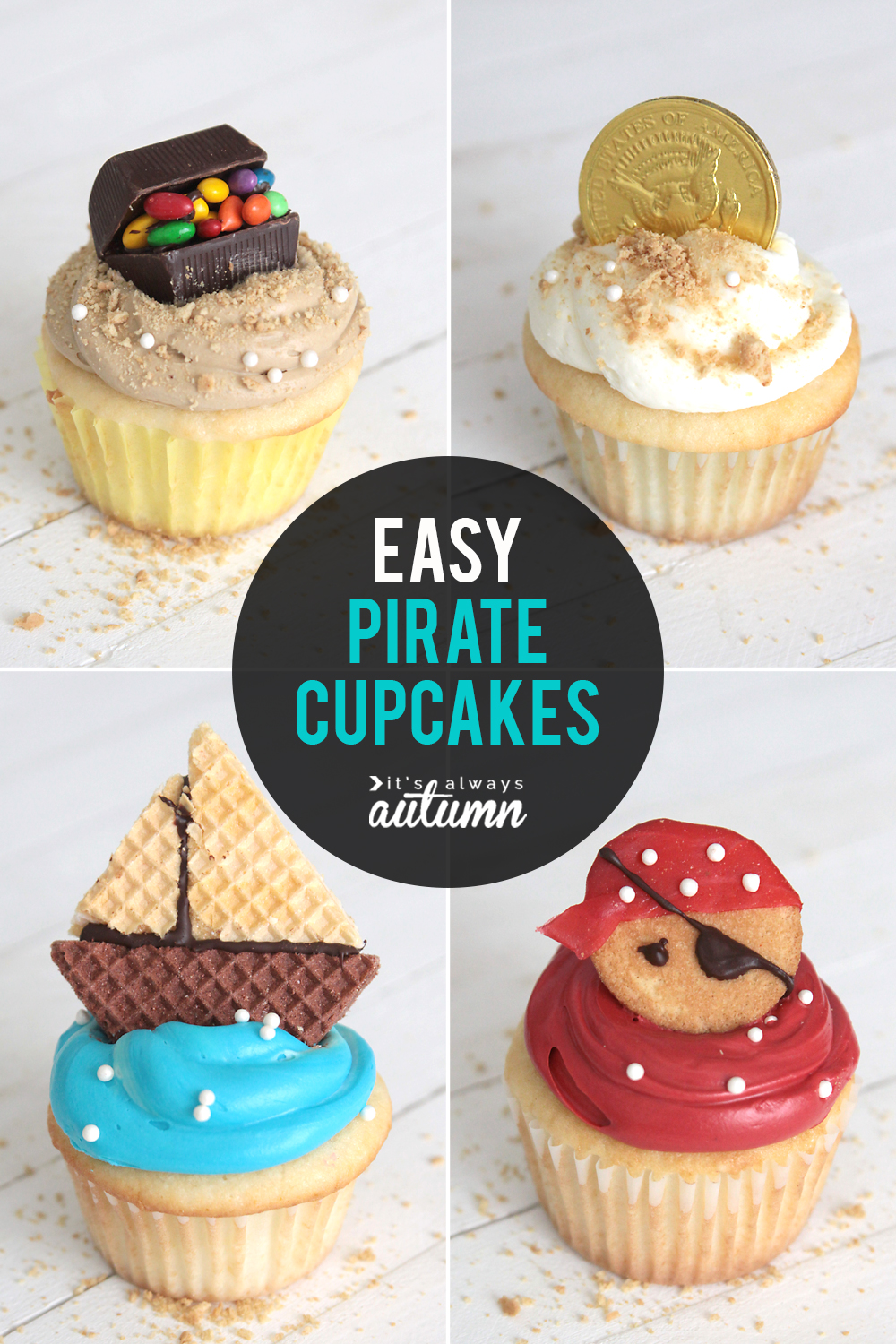 My little kids are obsessed with pirates. Our swing set out back is officially a pirate ship (fueled by swing power, of course), and I’m regularly asked to play Captain Hook. Last week I decided to win some “great mom” points by making some pirate cupcakes, so I started searching Pinterest for ideas. Much to my dismay, all the cute pirate cupcakes were made using fondant, which I just think is plain icky. I know, I know, there are certainly “better” fondant recipes out there, but I have yet to try one that tastes anywhere near as good as plain homemade frosting. Plus, crafting fondant creations is just beyond me – I’m pretty terrible at decorating cakes – so I needed to come up with something easy. So the troops and I set out to the store to figure out how to make cute & easy pirate cupcakes using candy, not fondant, as the decorations.

We started with an easy one: gold doubloon cupcakes. 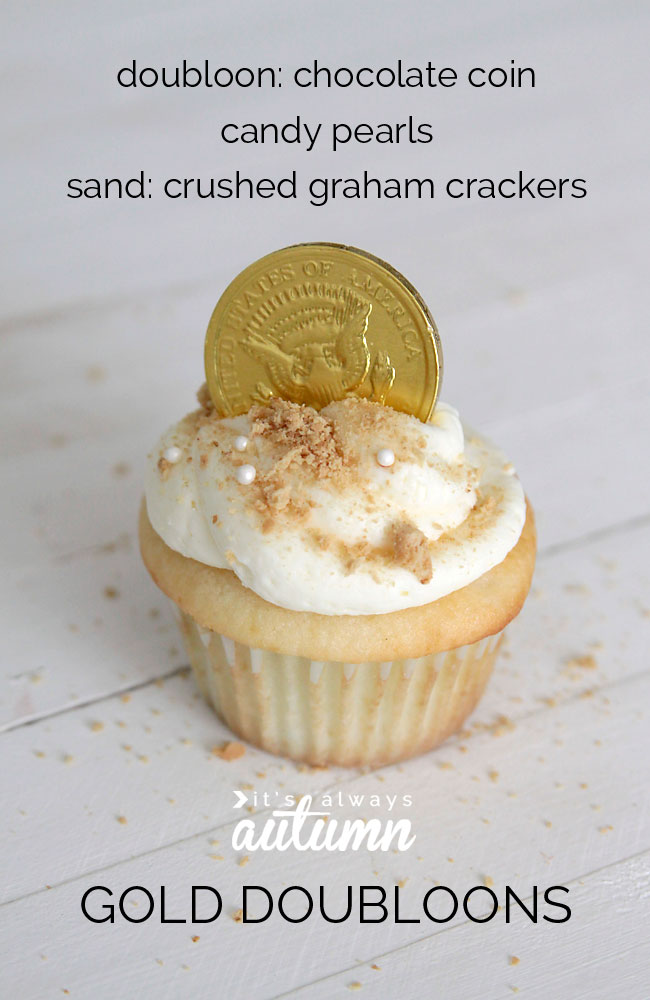 I scooped frosting into a sandwich bag, cut a hole from a corner, and “piped” the frosting on, starting at the outside and swirling into the middle. We crushed up graham crackers to make “sand” and then dropped on a few candy pearls (I found these by the cake decorating stuff in the baking aisle – they’re called cupcake gems by Betty Crocker). Top it all with a chocolate coin and you’re done! Easy.

Next we made pirate ship (Jolly Roger) cupcakes: 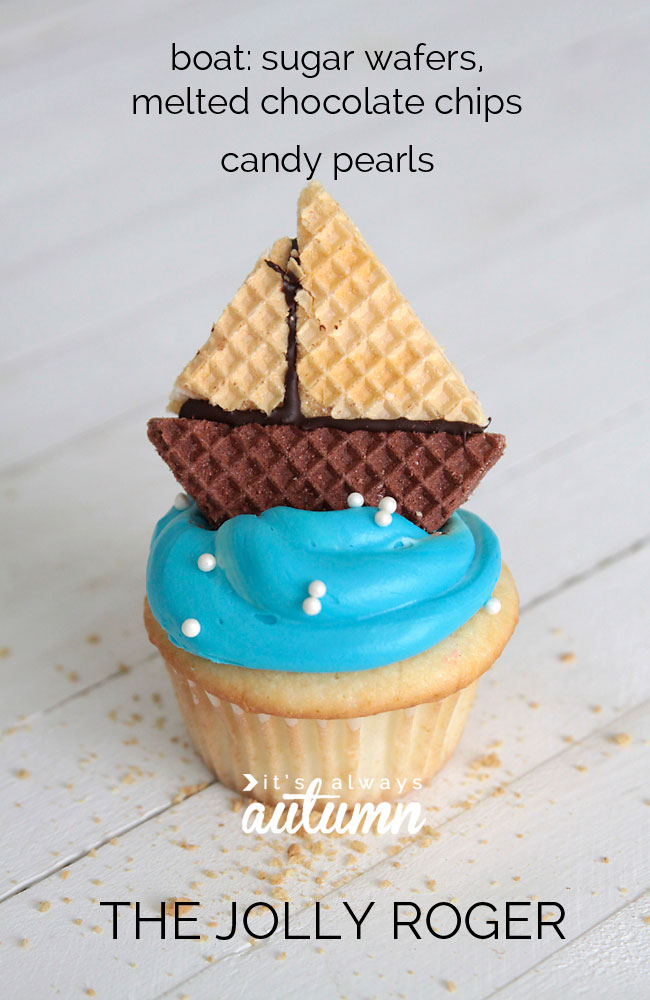 For these I used a sharp knife to slice vanilla and chocolate sugar wafer cookies into the right shape. Then I put some chocolate chips in a sandwich bag, melted them in the microwave, clipped off a corner of the bag, and piped chocolate out to “glue” the ship together. I laid the ships down flat on a plate and popped them in the freezer for a few minutes to harden up. TIP: if your frosting isn’t stiff, it helps to stick a toothpick behind the ship once it’s on the cupcake so it doesn’t fall over.

Next we made treasure chest cupcakes. 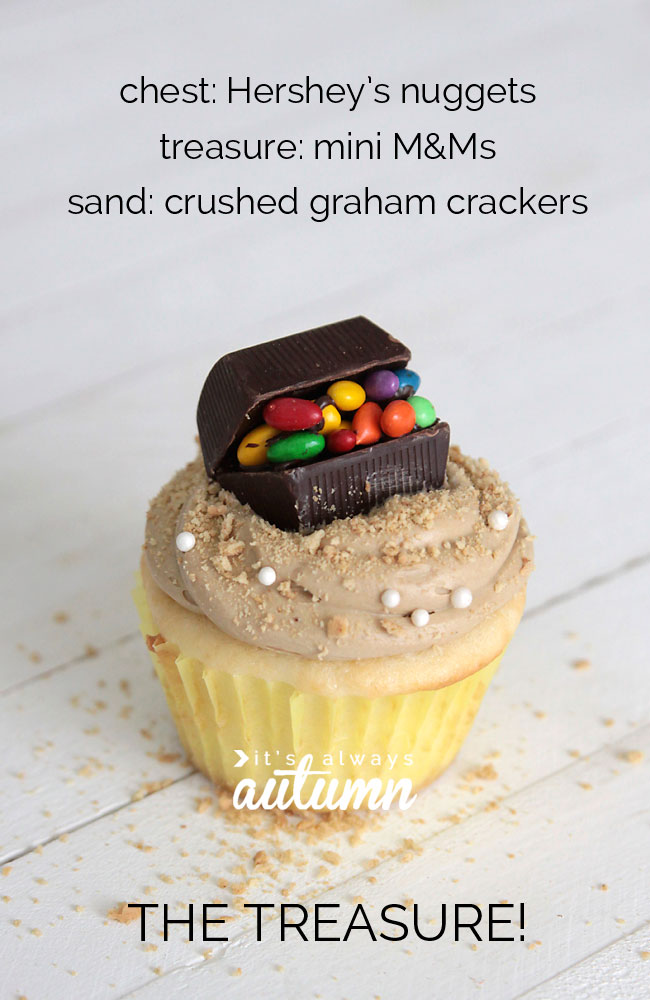 I got the light brown frosting by mixing some baking cocoa and yellow food coloring into white frosting. For the treasure chests I started with two Hershey’s nuggets, mini M&Ms (mine are actually candy covered sunflower seeds, but same same), and more melted chocolate chips in a sandwich bag. Put them together as shown below and then pop in the freezer until hard: 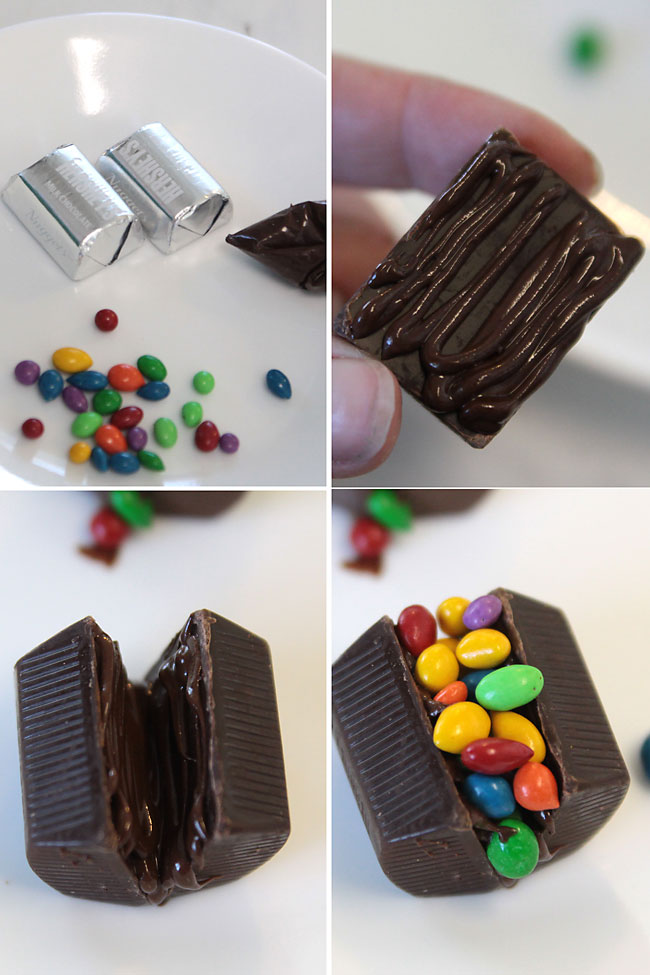 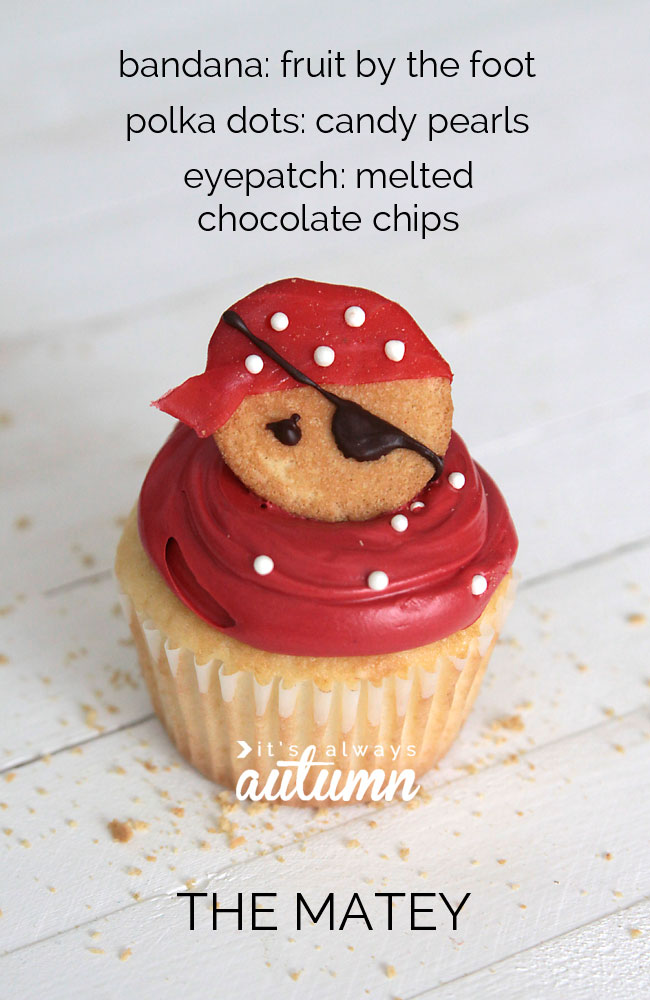 His face is a vanilla wafer cookie. I wrapped a piece of fruit by the foot around the top third or so and folded it over onto the back (just squish it down on the back and it will stay). I added more candy pearls to make polka dots on the bandana and then used more melted chocolate chips piped from a bag to make the eye and eye patch. To get the dark red frosting I used baking cocoa and lots of red food coloring in white frosting.