Far and away the most popular post on my blog has been this easy 4 ingredient artisan bread recipe. It’s so fast and simple and turns out so beautifully that people just love it (myself included). But one question I’ve gotten asked over and over and over is this: can you make artisan bread using whole wheat flour? My answer, up until now, has been no. Whole wheat flour doesn’t work the same way white flour does, so you can’t simply swap out white for wheat and expect a great result. But since so many people were interested in a 100% whole wheat version, I did some experimenting and came up with a beautiful 5 ingredient 100% whole wheat artisan bread recipe. 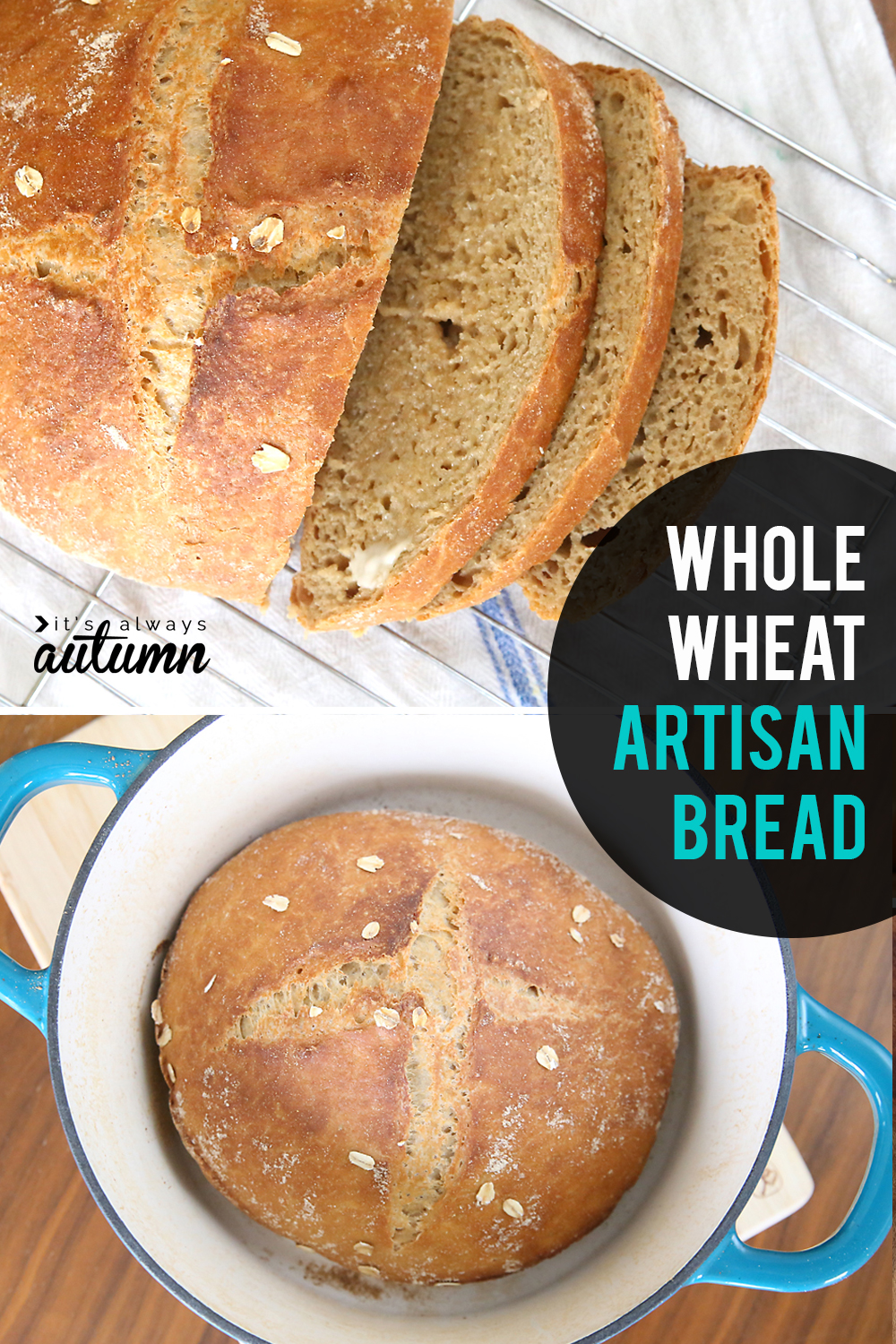 This whole wheat version has a lot of the same great qualities as the white version: it’s a no-knead recipe, which makes it easier than any other bead I’ve ever made (think homemade bread for dummies) and it only takes about 10 minutes of hands on time. The outside is crusty while the inside is chewy, and it’s really quite pretty. 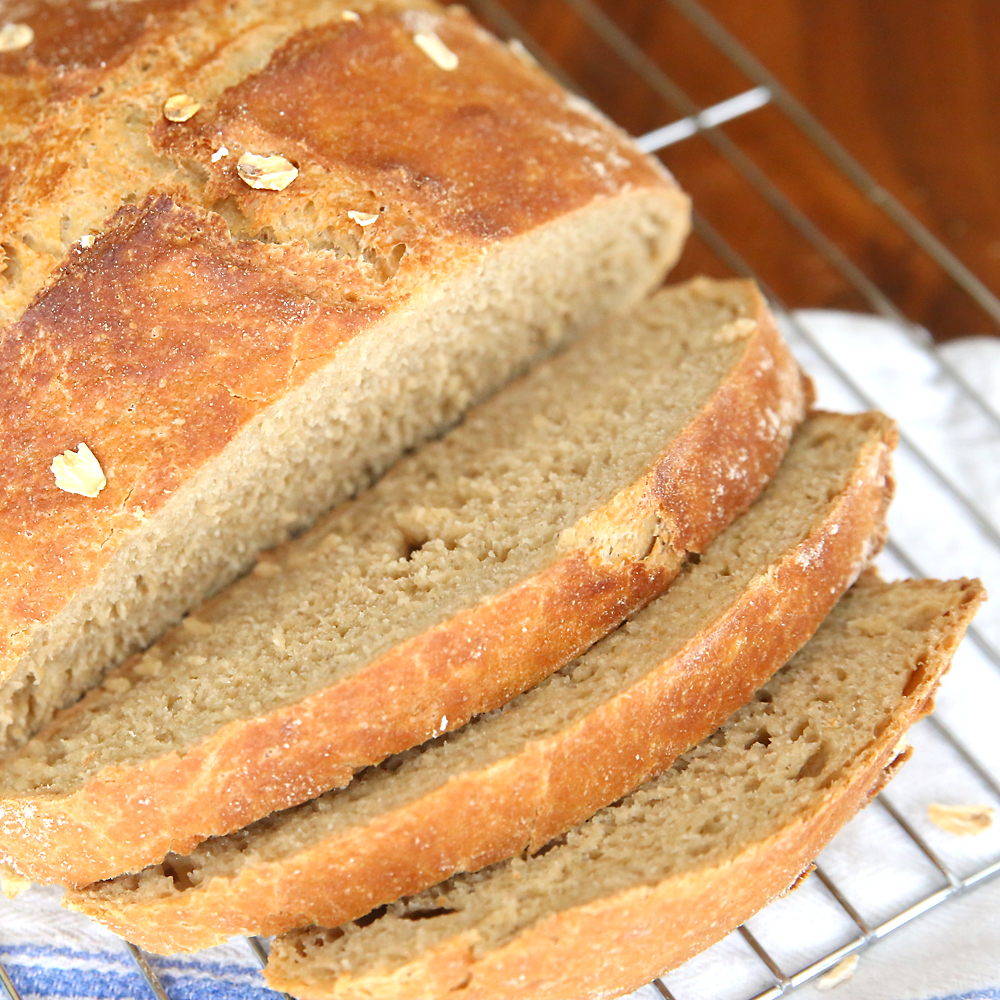 And this version is, of course, made with 100% whole wheat flour, which is great for people trying to make the switch away from white flour. 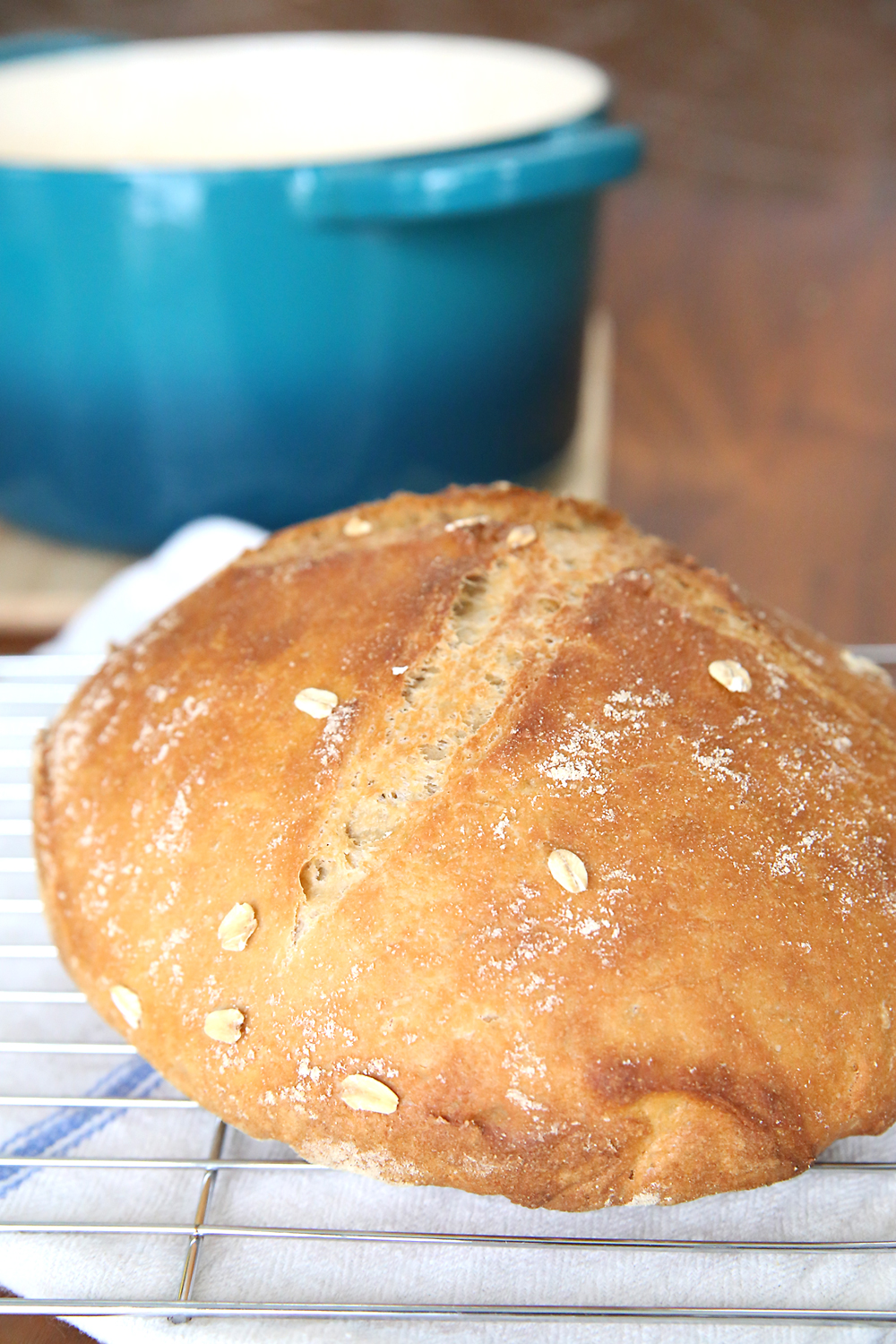 Now, in all honesty, can I say the whole wheat version is just as good as the original? No. When it comes to homemade bread, I always prefer the taste and texture of white flour. I know that might make me a bad human being (I also prefer ice cream to vegetables, any and every day of the week), but that’s the way it is. The white flour version is just a little tastier and a little lighter than the wheat flour version, IMO. It also rises a bit higher with larger air pockets. However, if whole wheat bread is what you’re looking for, I can honestly say this is a very nice rustic loaf. 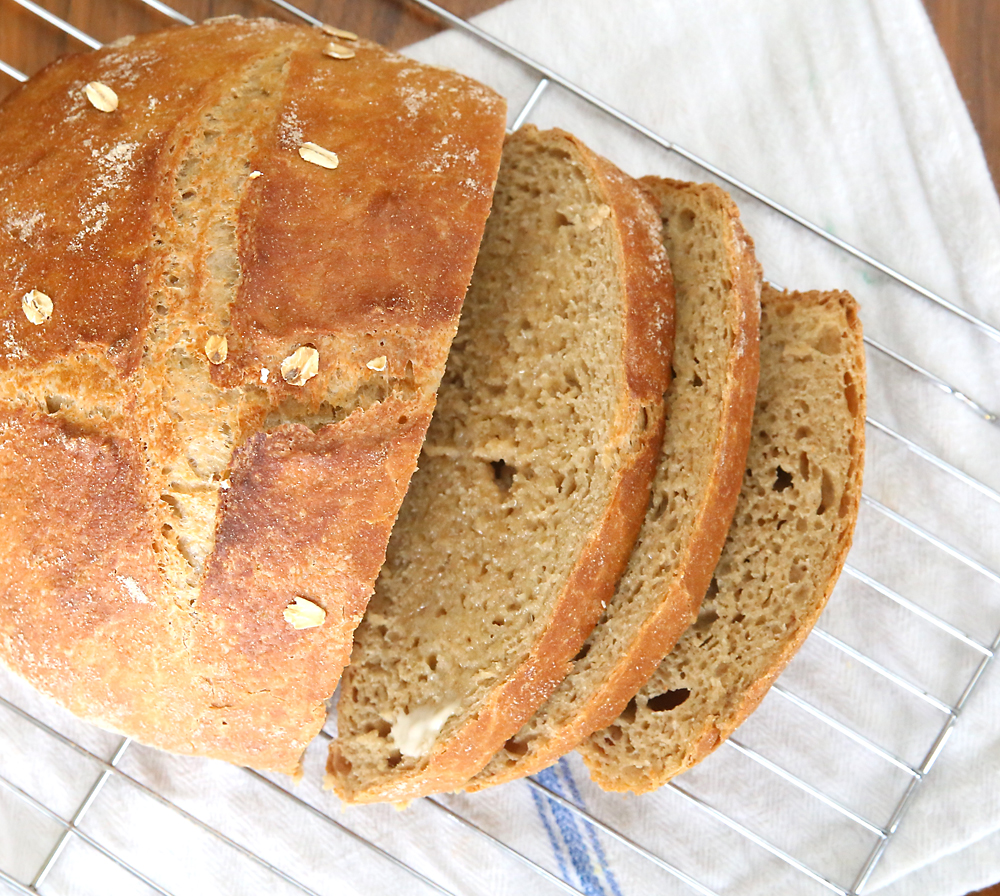 If you’ve made the original artisan bread before, you’ll see that the method for this whole wheat version is almost exactly the same. The ingredients are very similar too; we just use a bit more water in the wheat version because wheat flour absorbs more water than white flour, and I’ve added some brown sugar as well. There are two reasons for the addition of sugar: first, wheat bread generally doesn’t rise as high as white bread, so adding in a small amount of sugar helps give the yeast a boost so you don’t end up with a hockey puck. And second, I think the wheat flour really benefits from a bit of sweetness. I used 3 tablespoons sugar for a nice flavor. You could probably get by with less, but don’t leave it out completely – use at least 1 tablespoon for a nice rise. 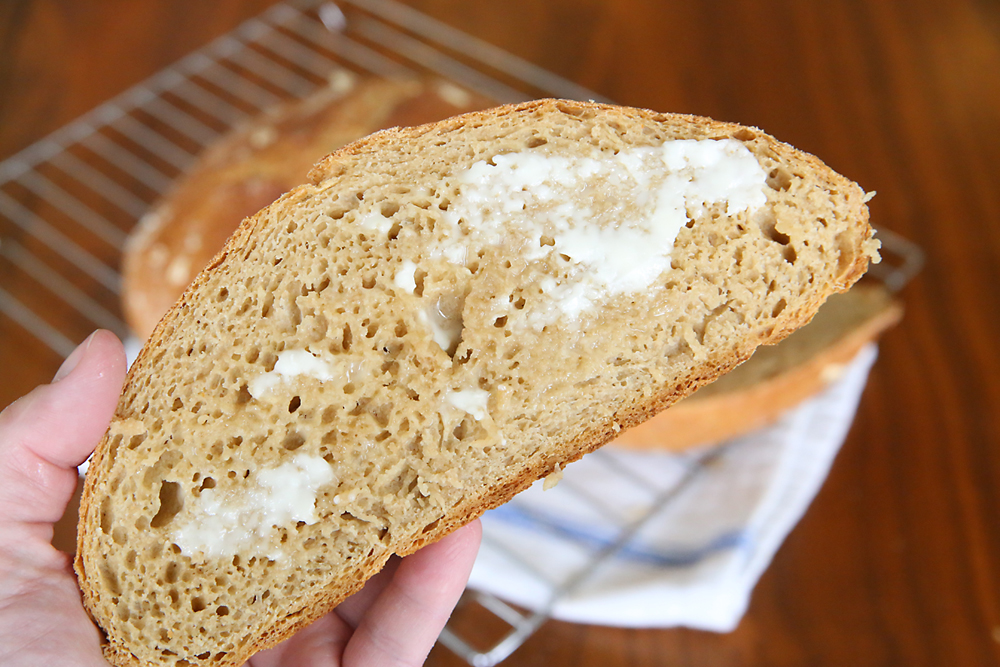 As with the original artisan bread, this recipe uses a very long rise time instead of kneading. That means you’ll start by mixing up the ingredients 12-24 hours before you want to bake the bread. So you do have to plan ahead to make this recipe, but in return it only takes about 5 minutes of work to get it ready to bake. 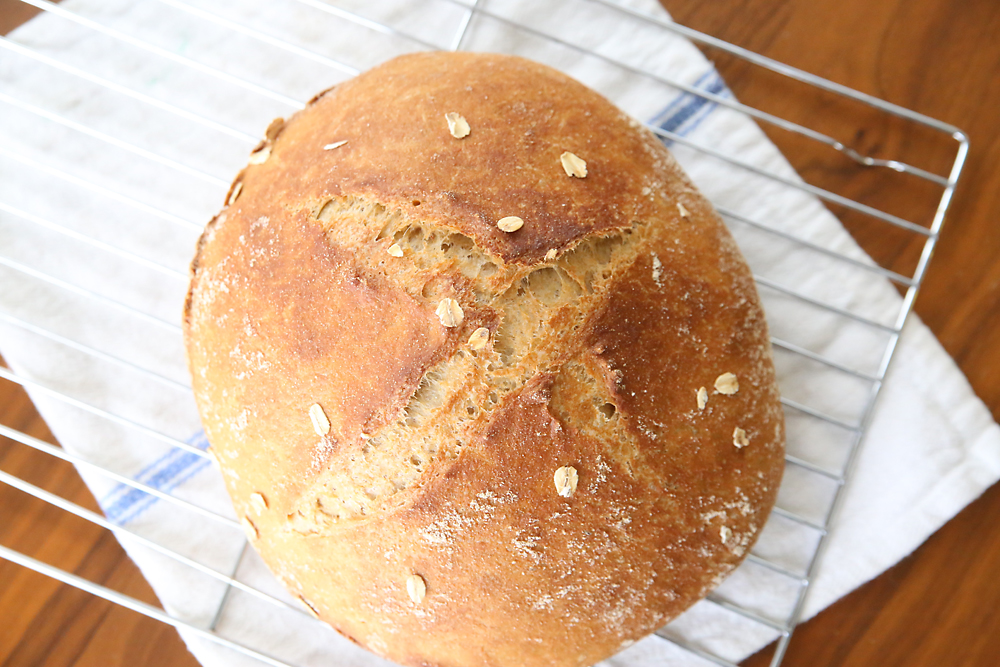 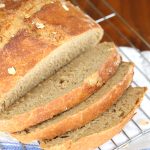 Next, here’s an instructional video I made that walks you through the entire process. Please note that this is for the original (white flour) artisan bread recipe. So some of the measurements will be a little different than what you need for the whole wheat version. However, the process is exactly the same. 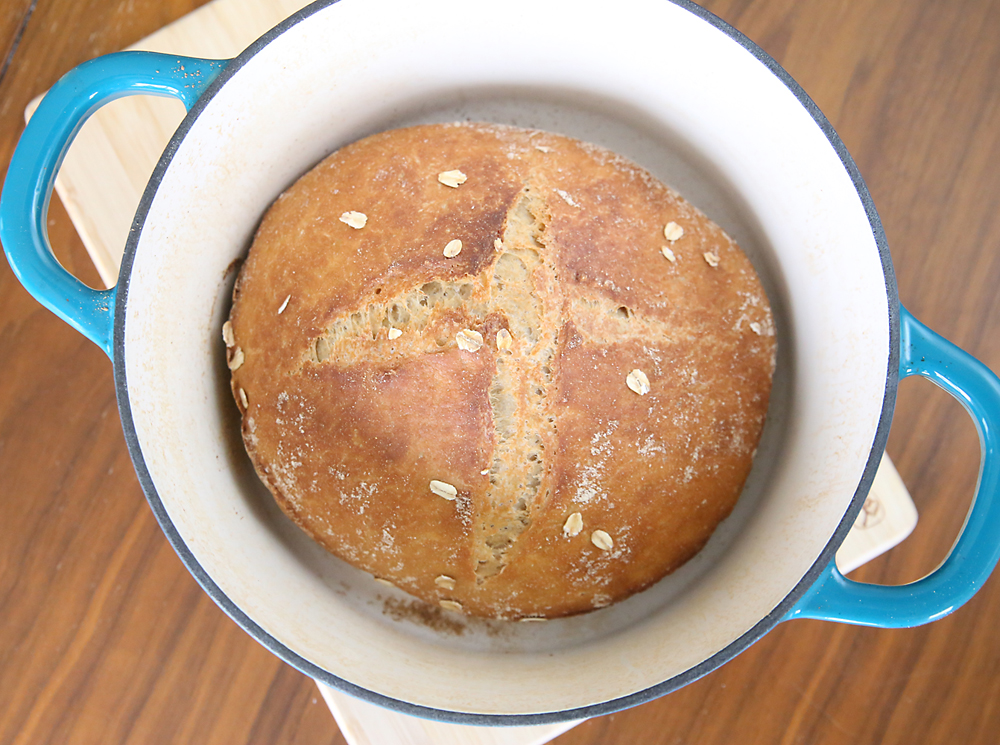