In today’s post: Learn how to make mini donuts at home in under 15 minutes! Easy cake mix donuts recipe.

Donuts! Last year for Christmas I got a Mini Donut Maker <—affiliate link

, and we’ve been a little donut crazy ever since. It’s so easy to use, and it’s nice to be able to make mini donuts that are baked instead of fried. And since we discovered you can make donuts in any flavor you want in under 15 minutes using a cake mix, we were hooked. My 13 year old regularly mixes up the simple recipe and bakes up a couple dozen mini donuts all by himself so he can share them with his friends. Kids go crazy for these, and since they are so much faster to make than cupcakes, they’re a great choice for birthdays, etc. 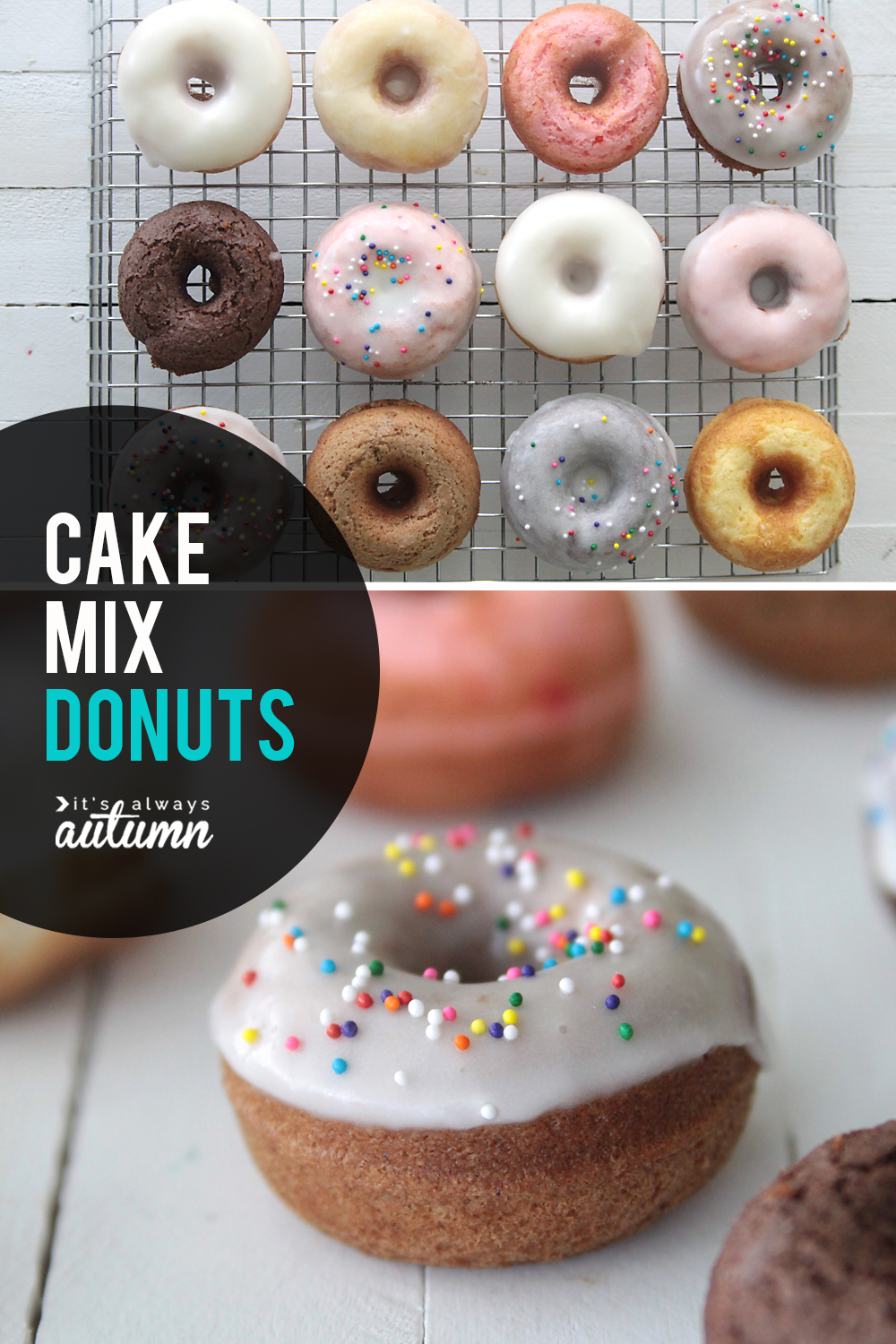 How to make mini donuts

Next, you’ll need a great mini donut maker recipe. The easy recipe I use starts with a cake mix, which means you can make mini donuts in any flavor you can find a cake mix in: chocolate, strawberry, lemon, white, etc.! We found a spice cake mix last week and the donuts made from it were absolutely delicious, especially when topped with a simple glaze. 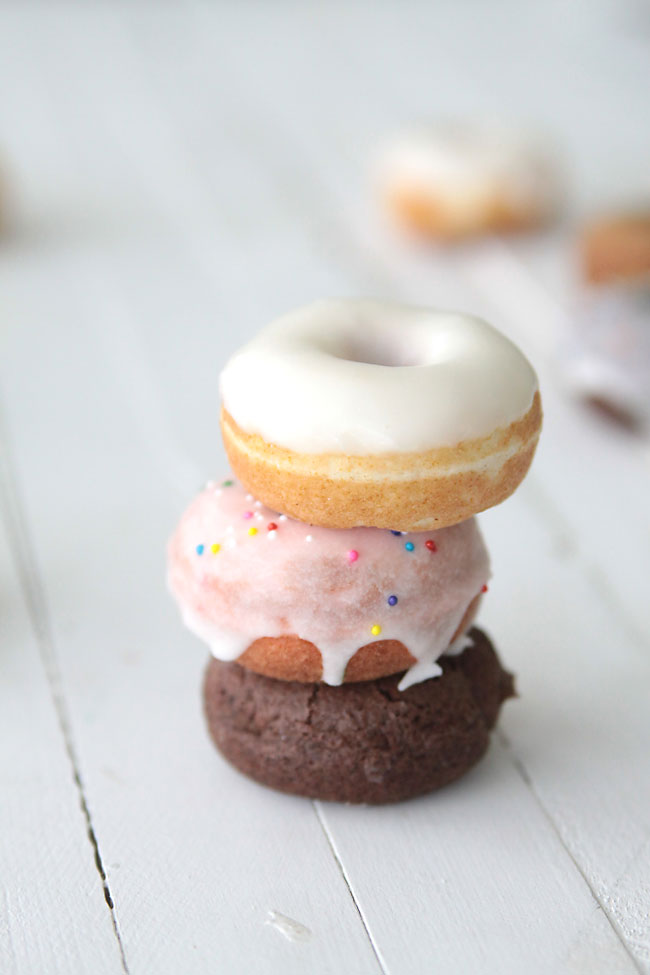 Like I mentioned, it only takes about 15 minutes to make a full batch of mini donuts (24-30) using the Mini Donut Maker

. I’m sure you could also use this easy recipe in a donut pan to bake full size donuts in the over, however, I haven’t tried it yet myself. 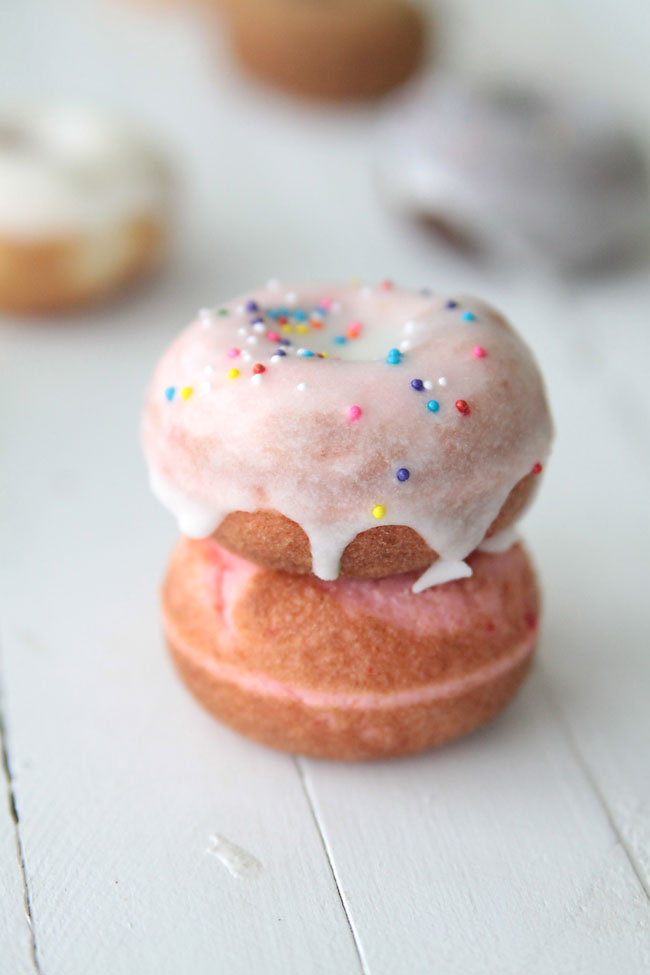 Now, before I give you the recipe I will say this: cake mix donuts don’t taste exactly like donuts you’d buy at the store. Since they are baked instead of fried the consistency is a little different, although they are quite similar to “cake donuts”. The taste varies depending on the cake mix you choose.

Ok, ready to make cake mix donuts? All you do is mix:

Whisk the ingredients together until well combined – a few lumps will remain. I like to dump the batter into a large resealable plastic bag, then snip off one corner and use that to “pipe” the batter into the mini donut maker, filling the bottom well as shown below. (Spray the unit once with nonstick spray before beginning.) 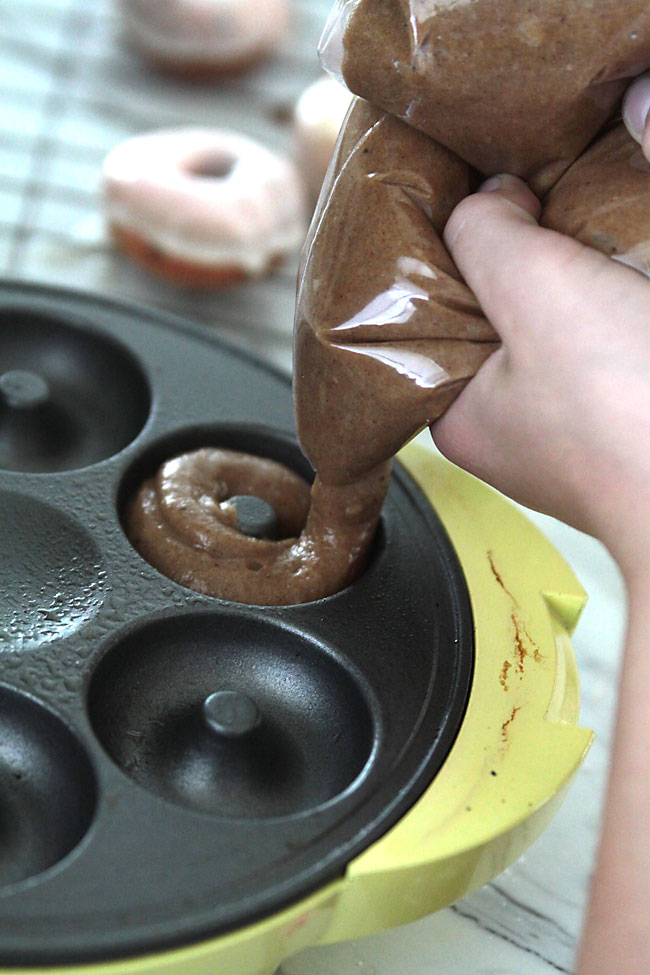 Once all 6 wells are full, close the donut maker and wait 3 minutes. Open it back up and use the included fork to remove the donuts from the maker and allow them to cool.

Now, for the glaze!

The glaze should be somewhat runny, as you see below. Dip the mini donut halfway into the glaze, then turn the donut sideways to allow extra glaze to run off. Let the glazed mini donut firm up on a cooling rack, adding sprinkles immediately if desired. After a few hours, the glaze gets firm enough so you can stack your cake mix donuts on a plate without smooshing. 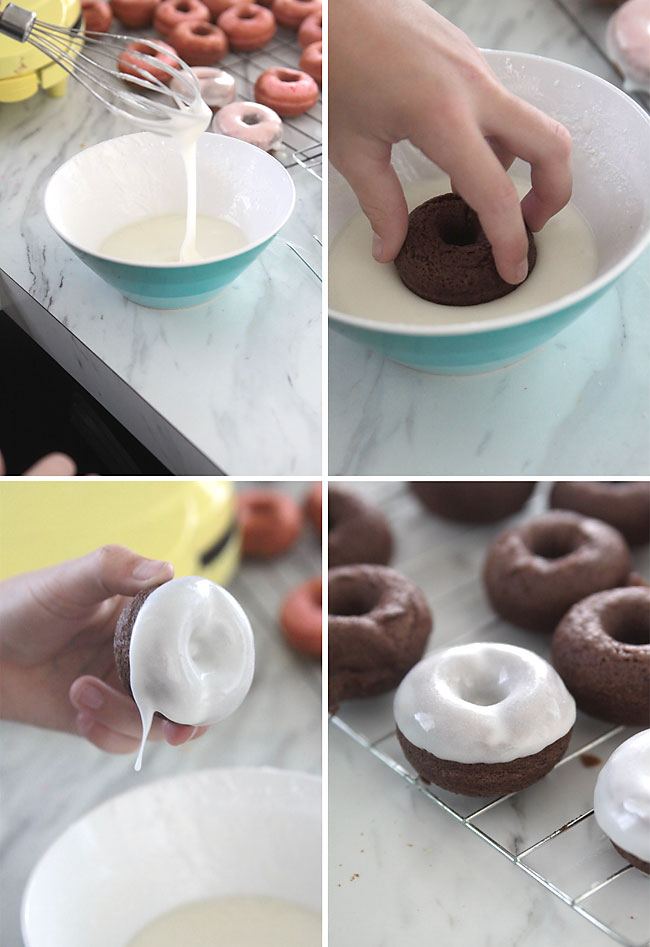 You’ll need to experiment a little with how thick or thin you like your glaze – thin glaze dries fairly clear, allowing the color of the donut to show through, while thick glaze stays opaque white. If you want pretty donuts, allow them to cool completely before glazing – the glaze doesn’t look as nice if it melts on a hot donut. But hot donuts taste great, so if you want to glaze and eat them immediately, go for it!

One last note, the donut maker will lightly brown whatever edge it comes into contact with, so if you are making strawberry donuts and want the tops to look pink, not brown, you should slightly under fill the wells so the tops don’t completely touch the unit while cooking.

We went hog wild last week and make 10 dozen mini donuts using 5 different cake mixes – and even when making that many it took us less than 2 hours. Fun!