In today’s post: If you’re headed out on a road trip soon, you’ll want to check out these fun games to play in the car.

As a mom, I’ve lived through a number of technological advances. I’m not sure any of them are as miraculous as the ability to hand a child a tablet on a long car ride. Seriously, as a mom who used to make 15 hours drives with kids back before we even had a reliable travel DVD player, I can’t quite express how wonderful it is to enjoy the blissful lack of whining while my children rot their brains watching a show or blowing up fruit. But as it turns out, my children (like most children) are all too happy to spend hour after hour plugged into various devices and ignoring all interaction with the outside world. These days road trips can start to feel a little lonely even when your car is packed with people!

Don’t get me wrong, I am grateful for devices on a regular basis, but I do feel the need to limit their use in the car to make sure my kids’ brains don’t melt. So we always spend some time listening to audiobooks, and I’m always looking for new road trip games to play. Now I know, some road trip games are really, really boring. Like deathly boring. I think most of the time I’d rather poke my eyes out with a stick then use them to play another game of I Spy with a young child. 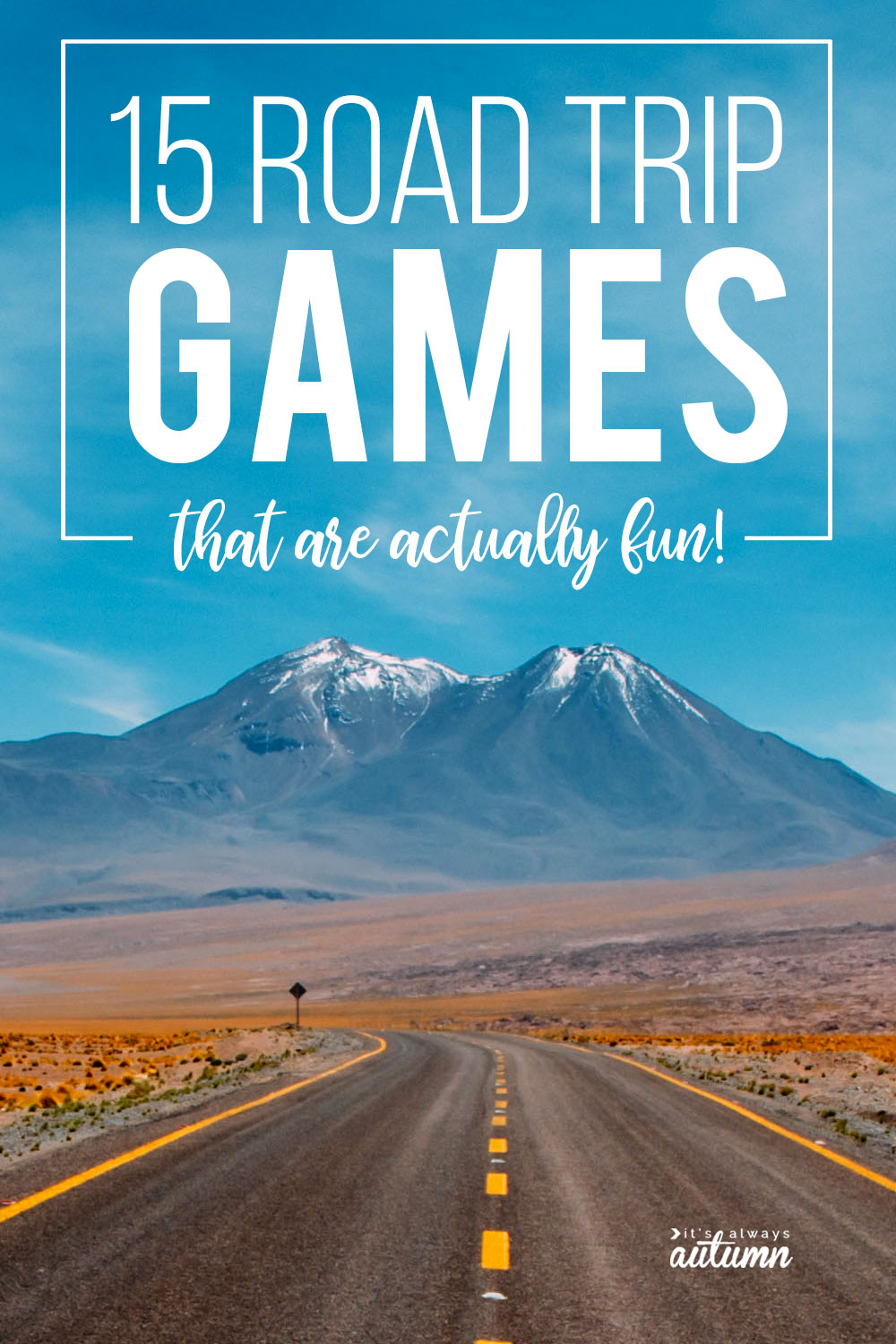 So I’ve collected 15 games to play in the car that are actually pretty fun! A few of them require a piece of paper and a pencil or pen, but other than that these games don’t take any advance prep. That means you can play them other places too – like while you’re waiting in line at Disneyland or waiting for your food at a restaurant.

1. The License Plate Phrase Game: In this road trip game, someone points out a license plate and everyone in the car tries to come up with a phrase using each of the letters and numbers in the plate. For example, a license plate that says DR8BAB could become “Donald reads eight books about bats” or “Dinosaurs ride eight brown army bikes.” Vote on your favorite and award points if you want.

Variations: Give your packing list a theme that matches your road trip destination, like Disney characters or things you’d find at the beach. OR play “doubles” and require each person to say a two word item where both words start with the assigned letter, like bubble bath or cookie cutters.

3. 20 Questions: This classic is the perfect game to play in the car! One person chooses a person, place, or thing. The other players can ask up to 20 yes or no questions to try to guess the item. Be sure to start with broad questions (Is the item alive?) and work your way to more specific questions.

Variation: For even more fun with this road trip game, consider buying the electronic version: 20Q (affiliate link). It’s a little handheld ball that will ask you the questions and make a guess. My kids have had so much fun with this! It’s pretty awesome at how well it does – we thought up the hardest things we could to stump it and it still guessed correctly.

4. The Category Game: In this easy game to play in the car, one person chooses a category and a letter (like Food and the letter B). Each person takes a turn naming something in that category that starts with the chosen letter: banana, bread, bagel, blueberries, etc. The first person who cannot think of another item is out. That person gets to choose another letter, and the remaining players continue to name things in the same category, now starting with the new letter. Continue until everyone is out but one person, who wins the game. That person gets to choose a new category and letter and the game starts again with everyone in.

Everyone knows the basics of how to play rock paper scissors (if you don’t you can learn how here). But the game gets more fun when you add two more options, like rock paper scissors lizard Spock. Or what about rock paper scissors fire unicorn? Encourage kids to make up their own 5-option version. Just remember that if you have 5 options, each option must defeat two other options (and be defeated by the remaining two).

How to keep score: Each time two players throw down a sign, the player who wins scores a point. Before each round, state the score like you would in a volleyball game (1-3 or 7-0). Keep playing until one player scores 21.

6. The Dot Game: This game does require paper and a couple of pens, but it’s still very easy to play in the car. Start by drawing dots on a sheet of paper (or print out a piece of dot paper here). Each player gets to draw one line to connect two dots. Play goes back and forth, with each player drawing one line, until someone’s line closes up a square. When you close a square, you get the claim that square by writing your initial in it, and then you get to go again. The first part of the game is easy; you’re just drawing lines wherever you’d like on the dot paper. But once quite a few lines are drawn, it’s time for strategy: you do NOT want to draw the third line of a square so that your opponent can then close it up. Because you can play again every time you close a square, sometimes you may be able to close up multiple squares in one turn! Once all the squares on the page are closed, count up the initials to see who won by claiming the most squares.

7. Punch Buggy: This classic road trip game is simple: if you are the first person in your car to spot a VW bug, you get to punch the person next to you. Now, in the interest of family harmony, that’s not always the best idea, so feel free to make up house rules. For example, when you see a yellow VW bug, everyone has to tap the roof of the car. When you see a red VW bug, put your hand on your head. When you see a blue bug, bark like a dog, etc. The last person to do the appropriate action when a bug is seen gets a point, and the winner is the person with the fewest points at the end of the road trip.

8. The Alphabet Game: The point of this road trip game is to find each letter of the alphabet, in order, in the signs you pass on the drive (you can also find letters in license plates). The first person to find each letter in order wins. If you’re driving through town, this game may be over in 5 minutes, but if you’re driving through rural areas it can take forever to find unusual letters like Q and X.

9. Road Trip Bingo: This game does take a bit of prep, but all you have to do is print out some bingo sheet before you go. Find some here, or here, or here.

10. The Name Game: This is an easy game to play in the car! The first player says a name, and then the next player needs to think up a name that starts with the last letter of the first name, and on and on. Example: Brenda, Adam, Monica, Ashley, Yvonne, Evelynn, Nathaniel, Lonnie, Ethan, etc. Anyone who says a repeat or can’t think of a name that fits is out!

More Games to Play in the Car

11. The License Plate Game: In this game, you’re each trying to find a license plate from every state in the nation. You can print out a map in advance so you can color in states as you see a license plate. Or just grab a pencil and a piece of paper and write down each different state that you see. Whoever has the most states at the end of the road trip wins.

12. Finger Notes: This game is a twist on telephone. In finger notes, The first person thinks up a word or short phrase, then she uses her finger to “write” the word on the next person’s back (or arm if you can’t reach their back). The second person tries to figure out what the word or phrase was, then uses his finger to write it on the next person’s back. Once the phrase has made it to the last person, he or she says it aloud and the first person tells the other players whether the phrase made it through everyone correctly or not.

13. Two Truths and a Lie: This classic party game works well as a game to play in the car. One person tells everyone else two things that are true and one thing that’s a lie, and then the other people try to guess which is the lie. Since you probably know the people you are on a road trip with pretty well, it can be hard to come up with things that will trick the other players!

14. Twenty one: This road trip game is super fast, but it’s really fun! Players take turns saying the numbers counting up to twenty one. Each player can choose to say one, two, or three numbers, and the goal of the game it to NOT be the person who says 21.

You can play with as many people as you’d like, but it gets more intense when it’s just between two people. Try it with other numbers too!

15. Fortunately Unfortunately: This last game to play in the car is a cooperative game that can get pretty silly. The first person starts a statement with “fortunately” and the next person follows it up with a statement that relates to the first one but starts with “unfortunately.” Keep going, alternating fortunately and unfortunately.

The best hacks for road trips with kids

Best hacks for your Disneyland vacation

Best audiobooks for all ages 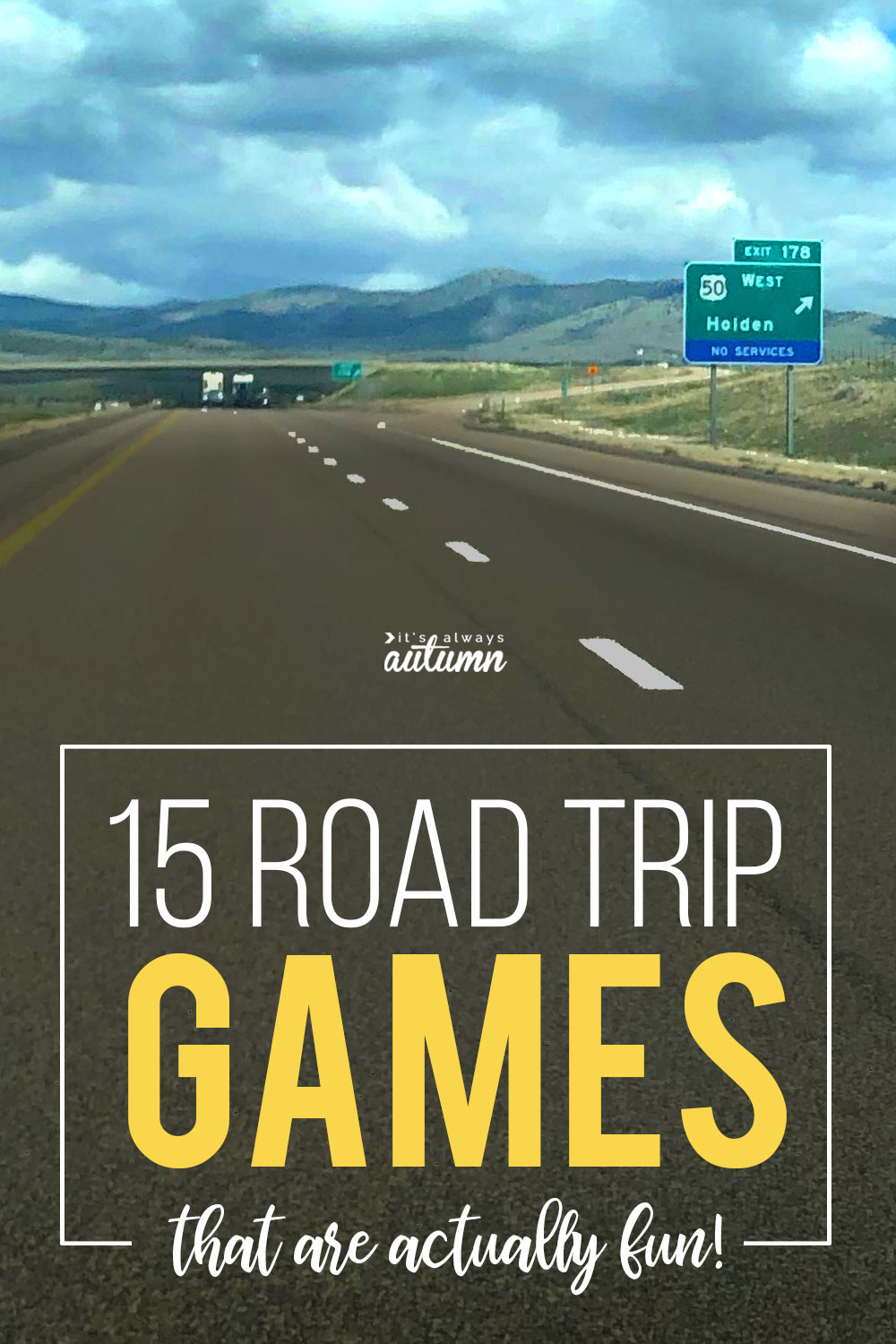