In today’s post: Teach your kids how to make a marshmallow launcher, aka the marshmallow catapult.

So, I occasionally have moments as a mom where I think “that was perfect. I’m a genius.” Like the time I got the child who’d been awake screaming for two hours with an ear infection to settle down and go to sleep by stuffing a little chocolate in his mouth. Or when I made the illustrated cookie recipe so my preschooler could follow along on the recipe when we make cookies. Now, the time I tried to put said preschooler to bed at 8 pm one night and he asked “but when do I get to have dinner?” was not one of those times. And the time the tooth fairy forgot to come for the third night in a row was also not one of those times…

So, alright, the times I do feel like a genius mom are few and far between, but the day I came up with this marshmallow launcher was one of them. It was spring break and we were in desperate need of something fun to do that 1) didn’t cost much and 2) wasn’t too complicated. Inspiration hit and these simple kid-constructed marshmallow launchers were born. Keep reading for photo tutorial.

All you need to make a marshmallow launcher catapult is: 4 large marshmallows, 7 bamboo skewers, a thin rubber band, a plastic spoon, and masking tape. 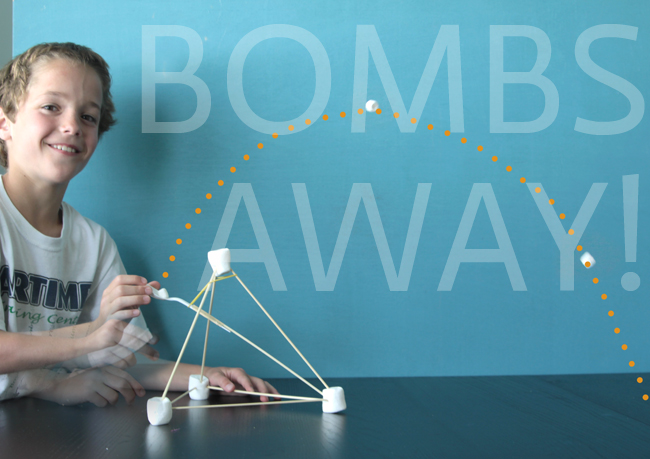 Construction is simple enough that my 4-yr old was able to make his own. The older kids spent a while making “mods” to their catapult, reinforcing the joints with more masking tape, etc. Here’s the process:

Directions: Using 3 marshmallows and 3 skewers, form a triangle. Use 3 more skewers and 1 more marshmallow to form a pyramid. Tape plastic spoon securely onto the end of another skewer. Loop thin rubber band over topmost marshmallow. Insert spoon skewer through rubber band and into one of the base marshmallows.

Kids can play with their marshmallow launchers immediately after construction, but they’ll need to be fairly gentle so they don’t tear the marshmallows. Being gentle can be difficult for kids, so I recommend you construct the catapults one day, then let them sit out overnight so the marshmallows will stiffen up and become much stronger, allowing for rougher play and stronger launching.

We taped a target in the middle of our dining room table and took turns launching marshmallows at it: 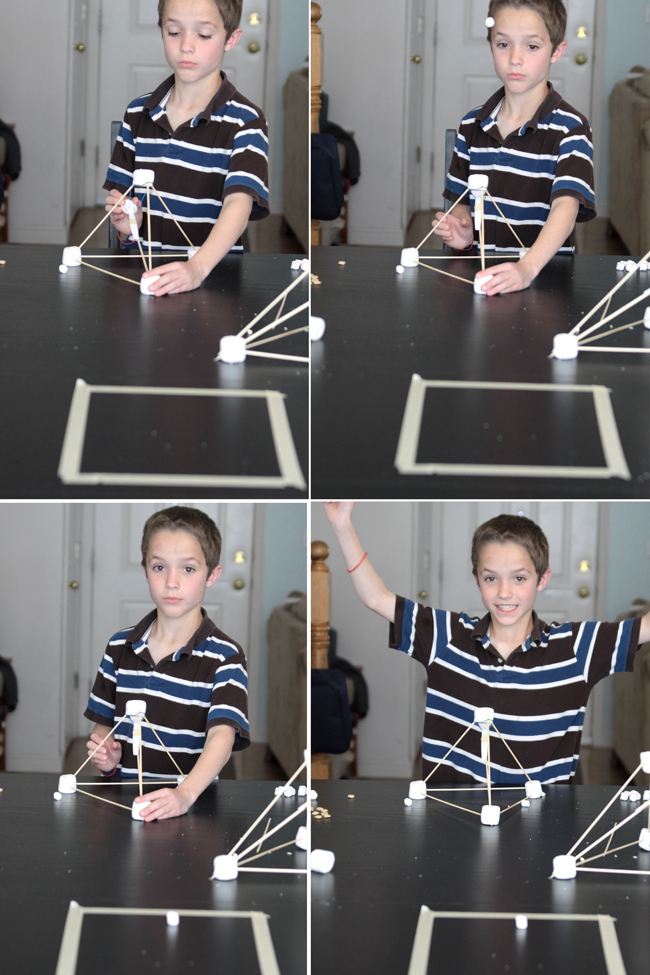 I even made a bunch of these the day before my oldest son’s 12th birthday party, then sent all the party attendees outside with them. We used hula hoops for targets out on the back patio. The boys at the party had a blast launching small candies across the yard.

One last note – the skewers do have a pointy end which can be fairly sharp, so if you are making these with younger kids you might want to snip the point off with kitchen shears.

If you’re looking for more kid fun, check out these posts:

Make a mini foldable book from one sheet of paper