In today’s post: Find 11 easy cards games that are super fun to play! Each of these games is easy enough for kids and fun enough for adults or teens.

Heading into the end of summer usually means one of two things for moms: either we’re panicked that the kids will be back to school soon, which means we have to make the most out of every single moment we have left together, or we’re dying for a way to keep them busy without bickering, because one more argument might just do us in. And yes, it’s perfectly acceptable to feel both those things at the exact same time ?.

The end of summer is also a great time for card games! You can play them when you’re camping or at family reunions, and they’re a life saver when everyone has maxed out their screen time for the day. 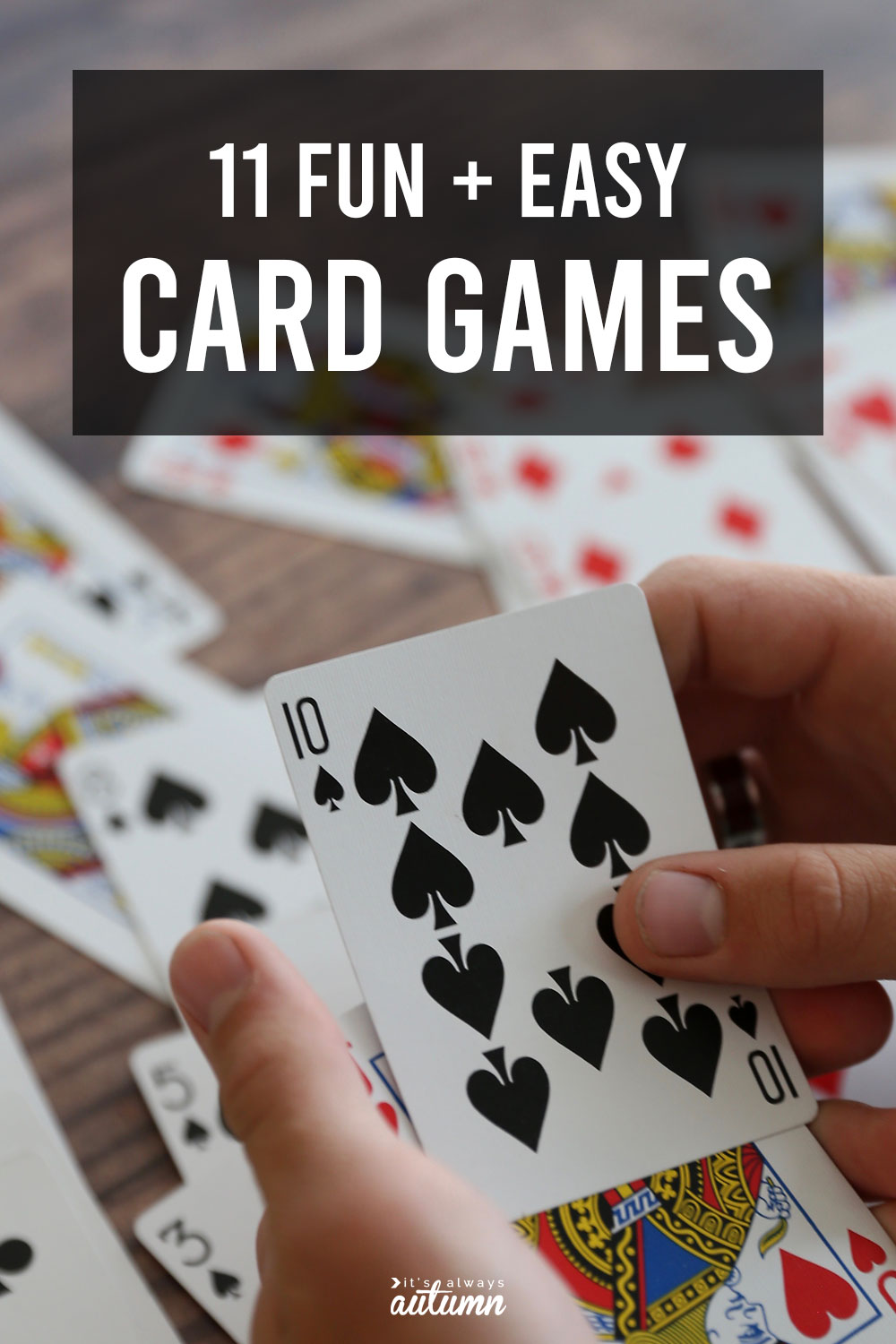 Today I’m sharing some of our favorite easy card games. Each of these games can be learned in five minutes or less, making them easy enough for kids, but they’re also really fun, unlike some card games I’ve suffered through as parent (I’m talking about you, Go Fish).

Each card game requires nothing more than a deck of cards. And maybe some other easily accessible items, like a paper to keep score on, or in the case of Spoons, some spoons. The point is that these card games are easy to play anytime and anywhere! 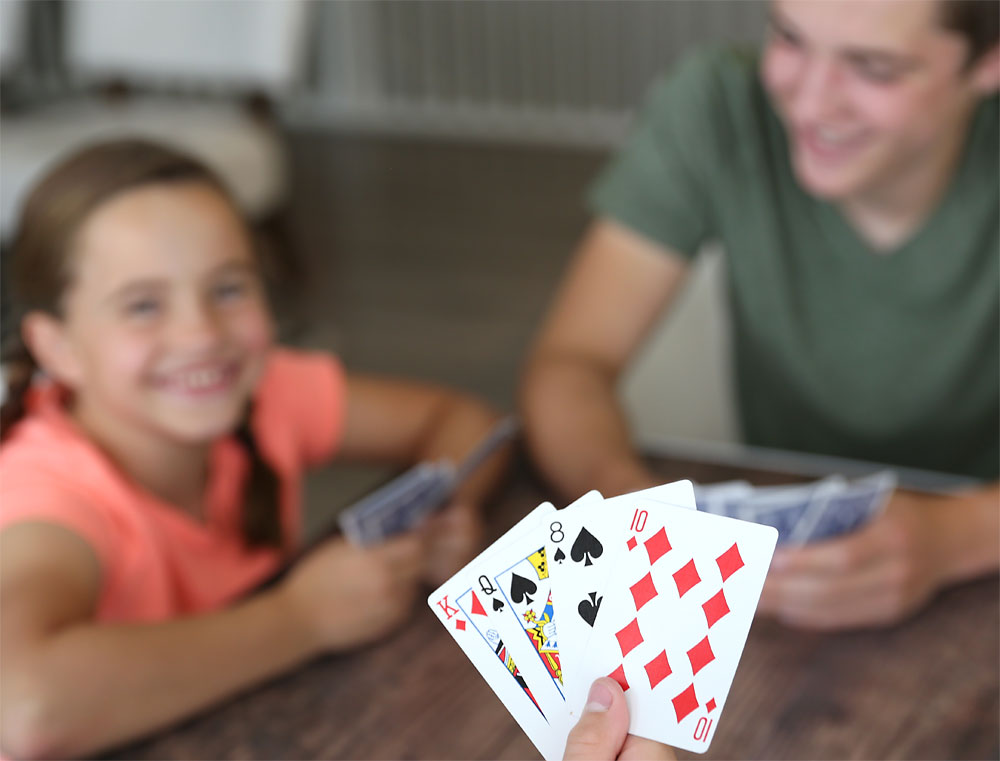 Spoons has got to be the best easy card game of all time. Game play is ridiculously simple – you just pick up and discard cards until you get four of the same number – so even young kids can play. But the addition of spoons turns a normal card game into an exciting, fast paced competition that’s super fun! Teens especially love this game, which can be played with as many people as you’d like. Watch the video below to learn how to play, and try not to break anything once you get started ?. Find full instructions + strategy tips here: how to play the Spoons card game

California Speed is our very favorite two player card game. As the name implies, it’s a fast paced game where speed is of the essence. Each player starts by laying four cards on the table, face up. Then players race to cover any cards that have a match showing with new cards, continuing until all matches have been covered. At this point players pick up the piles in front of them and play starts over, with the object being to play all of your cards before your opponent plays all of hers. It’s a fun game because it goes so fast there’s no chance to get bored, and each round is relatively quick (although rounds between two opponents who are both good will go longer!) Watch the video to learn how to play, and get more tips here: How to play California Speed

War may be the easiest card game around, which makes it great for playing with kids. However, since it moves quickly it doesn’t get boring like other “kids” card games. War is generally played between two people, although you could play with three of four (you’d probably want an additional deck of cards for 4 players). Watch the video for instructions:

Spit is a fast paced, easy card game for two players. Both players play down whatever cards they can at the same time, so if you’re a person who doesn’t like waiting for other people to take their turns this is the game for you!

Kings in the Corners

Kings in the corner is a game for 2-4 players that is based on luck and skill, not speed. Each player plays in turn, drawing a card and then playing as many cards from their hand as they can. Cards are played on piles with numbers going down, alternating red and black, and piles can be moved on top of each other when the right number is reached. The first person to play all her cards wins.

Golf is an easy card game for 2-4 players. Each player has four cards in front of them and the object of the game is to get your 4 cards to total a lower score than your opponent’s 4 cards. The catch? Your cards are face down and you only get to look at 2 of them, plus you never know what cards your opponent has.  Each round is fairly quick, with the idea being that you play 9 rounds and total your scores. Watch the video for full instructions:

Scat is similar to golf, in that game play consists of drawing and discarding cards, but in this game you are trying to get a higher score than your opponent, and you can only score points if the cards in your hand are all in the same suit. This is a great one to play with kids to help reinforce early math skills!

Rat Slap is another super fun card game that involves speed. It can be played with two or more players, and you begin by dividing the cards between all the players. The object of this game is to collect all the cards in the deck by winning them from your opponents. When players lose all of their cards they are out of the game, but there’s always a chance to slap back in when two cards of the same value are played, meaning you can come back from nothing to win the game. Rounds can go quickly, or they may take up to 45 minutes or so.

Garbage is a great card game for 2 or more (you’ll want to use an additional deck for 4 players). Each round is fairly short, but you’ll need to win 10 rounds to complete the game, so it’s a great game to play when you have some time to kill. Of course, if you don’t have that much time, you can just play until someone has won 3 or 5 rounds. Watch the video to see how to play:

We can’t forget Slap Jack! This is another super easy card game that is great for kids to play on their own with no adult help needed. Players take turns playing down one card at a time, and whenever a Jack is played all players slap it. The first to slap gets that pile of cards. Play continues until one player wins all the cards.

How to play the dice game 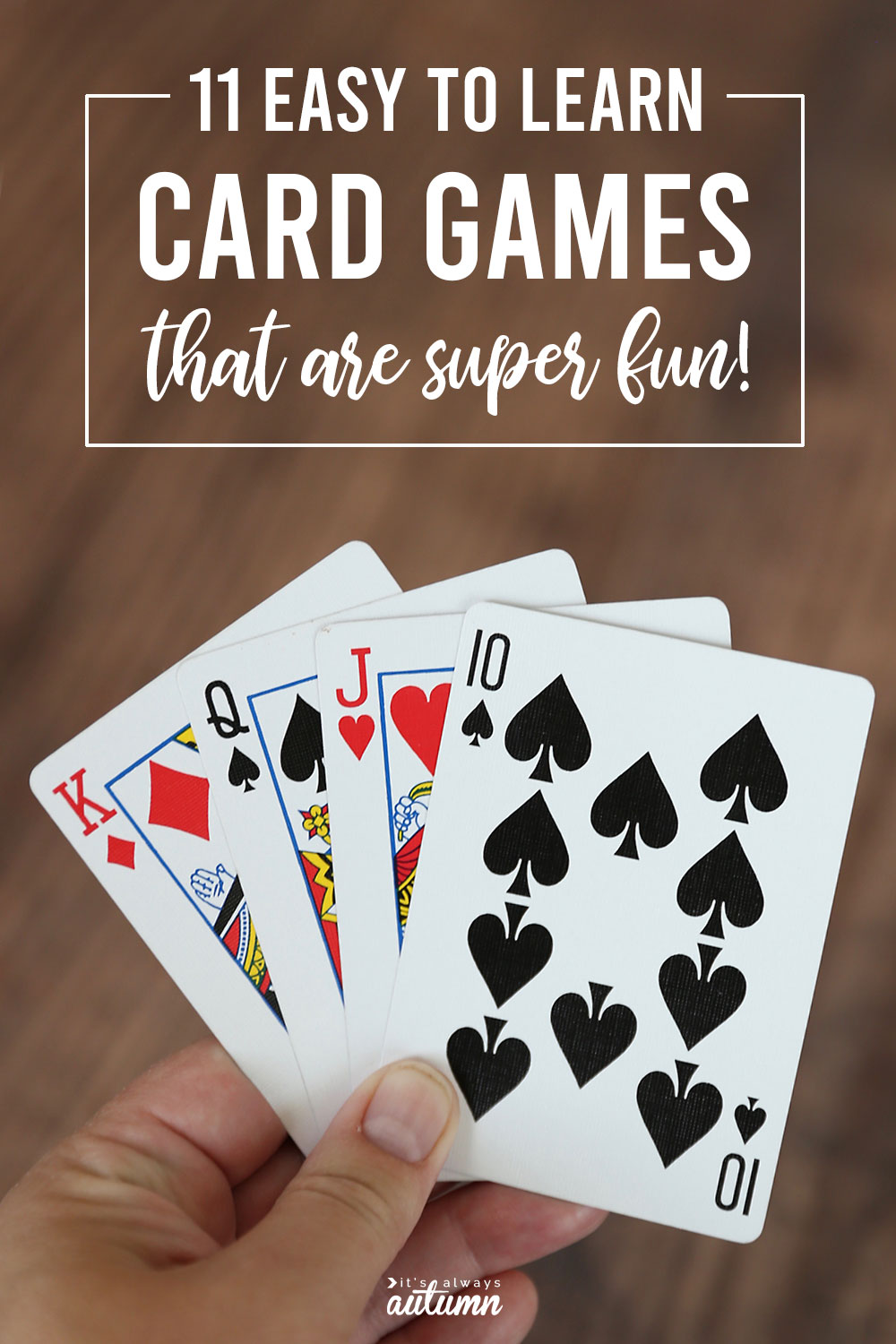 « How to make a pretty floral v-neck t-shirt
20 easy art projects for kids that turn out AMAZING! »